Second half of Fitt XXXVI: Beowulf gets bitten! Above is a picture, courtesy of Wikipedia, of white-bearded Beowulf with his iron shield directly facing the dragon's fire. You might want to compare it with a scene from Disney's Sleeping Beauty that terrified me as a young boy. 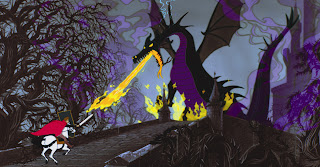 Wiglaf finishes his exhortation to the other troops to enter the fight to support Beowulf, who is outmatched by the dragon. He receives no response, so rushes out himself and encourages the king with a few words. The dragon then burns Wiglaf's wooden shield "to the boss." That is the metal centre to the Viking shield. Again, Wikipedia shows a clear picture of what is meant.

So Wiglaf shelters behind his king's iron shield, which was made not to burn. Beowulf's sticks his sword in the dragon's head, but it breaks. We are specifically told that the "bursting" of the sword is not the sword's fault, nor the dragon's victory, but was due to Beowulf's strength. Apparently, he was always doing that to swords.

His sword, Naegling, is pronounced like "nailing" and means either "the Nailer" "the Nailed One."

Through the reek of war he waded in helmet
to support his lord, and spoke a few words.
"Dear Beowulf, be brave in your actions,
"as you told us in the time of your youth,
"you would not allow, while you still lived,
"your fame to fade. Now, fight boldly,
"a strong-minded noble, with nothing reserved;
"defend yourself! I stand with you."

After these words, the worm came in anger,
the awful affliction another time
to wash his foes in flaming waves,
the hated humans. The heat-waves burned
his shield to the boss. His byrnie failed
to aid the young hero in any way,
but the young man kept behind his kinsman's shield
advancing bravely, when his own had been
fuel for the fire.
The fighting king
remembered his strength and struck mightily
so that his sword stood from the head,
narrowly driven, and Naegling burst.
Beowulf's sword broke in the fight,
old and grey-streaked. Not granted to him
that iron edges ever provided
help in the fight. His hand was too strong,
so each of his swords, or so I have heard,
was destroyed by the strength of his stroke in battle.
Even wound-tempered weapons were no better.

Then, for the third time, the threat to the people,
the fire dragon, vindictive and fierce,
rushed at the warrior when there was room,
a burning terror, and took the whole neck
between his teeth. A torrent of blood
Spread over him, spurting in waves.
Posted by Gareth at 9:13 AM

Gareth
Father to Denis, husband to Jin. Brother to Deborah and Theresa. Son to Ian and Margaret.